Our Selected Tours from Casablanca

Our 9 Days Tour in morocco begins from Marrakech or either Casablanca, Rabat, Fes and finishes in any town of your alternative. You’ll select a budget, mid-range, or high finish luxury riads to match your preferences! we are able to modify this trip to suit your needs perfectly!

⇒ The price for the tours will be dependent on numbers, the higher the number of people in your party the lower the cost per person.

⇒ All accommodation will be private, you will only share vehicles, if applicable.

⇒ We are not liable for personal injury or loss of your own property. You should take reasonable care of your belongings at all times.

Please complete our booking form below or fill in the inquiry form with the requested information so that we can get an accurate Morocco Tour proposal to you promptly, Fields marked with (*) are required.

DAY 1 : ARRIVAL TO CASABLANCA
On this Best Morocco Private Tours, we will meet you at the airport on your arrival and take you to visit the Largest Mosque in Africa,Hassan II . In fact this mosque took 7 laborious years to build. The Mosque can hold up to 25,000 for prayer inside, and 80,000 on the Mosque’s grounds outside.

DAY 2 : CASABLANCA – CHEFCHAOUEN
On the second day of your tour, you will be visiting the largest Mosque in Africa, the Hassan ll. In fact this mosque took 7 laborious years to build. The Mosque can hold up to 25,000 for prayer inside, and 80,000 on the Mosque’s grounds outside. After your tour in The Hassan ll Mosque we will drive to the city of Chefchaouen (The blue City), passing through Rabat, the Capitol City of Morocco. The day’s journey will end in the beautiful city of Chefchaouen. Rest of the evening in yourRIAD or Hotel. Distance: 334 km (207.538 miles)

3 DAY 3 : EXPLORING CHEFCHAOUEN
After breakfast, self to do tour of the city of Chefchaouen (The Blue City),It is one of the stunning villages at the feet of the Rif mountains. Chefchaouen medina had a Spanish-style square surrounded by many funky arts and crafts stores, roof-top restaurants and cafes where you will spend your night in a nice place to enjoy the breeze and the beauty of nature.

4 DAY 4 : CHEFCHAOUEN – VOLUBILIS – FES
After breakfast we will depart from Chefchaouen and drive towards the city of Fez. On this Top Tours Morocco, you will cross the Rif Mountains and into the Middle Atlas Mountains, making stops to visit the ruins of the Roams in Volubilis, then onto Meknes for lunch. In Meknes city you will explore all its fascinating sites. Following the tour of Meknes you will continue your journey to Fez. Rest in yourRIAD or Hotel for the evening. Distance: 200 km (124.274 miles)

5 DAY 5 : EXPLORING FES
Your guide will meet you at your hotel at 9am. Explore the cultural and spiritual center of Morocco during this full day tour of Fes. Also known as Fes el Bali, this UNESCO World Heritage Site was founded in the 9th century, and is home to the world’s oldest university. The city of Fes reached its true economic and cultural height in the 13th–14th centuries under the Merinids, when it replaced Marrakech as the capital of the kingdom. Fes has retained its status as the country’s Artisan centre. Artisan workshops in the medina are as active today as they were 100 years ago, and strongly contribute to the city’s industrial economy. Trades such as blacksmithing, leather working, ceramics, silk, tapestries, and sculpting are still practiced in these workshops today. The original ramparts still protect this ancient city and its estimated 9000 narrow passageways and bustling streets. Your visit includes :The MedersaBouInania, Bab Boujloud, The Splendid fountain at Place Nejjarine, The Mellah – The Jewish Quarter, Souks, The Chaouwara tanneries

6 DAY 6 : FES – MARRAKECH
Today , you will drive through the high way to Marrakech

7 DAY 7 : EXPLORING MARRAKECH
Today, you will be exploring the city of Marrakech. In fact name Marrakech comes from the Amazigh (Berber) MUR (n) AKUSH which means “Land of God”. Marrakech lies at the foothills of the breathtaking Atlas Mountains. Hence you will visit the most fascinating and common sites of Marrakech city, starting with the Palace of Bahia, Tombs of Saadians, Garden Majorelle, the Koutoubia Mosque, and ending the day in the square of JamaaLafna and the Souks. The square of JamaaLafna is overflowing with shops, crafts, entertainment and a host of restaurants.

8 DAY 8 : FREE DAY IN MARRAKECH
Today, you will have time to relax and maybe try Moroccan SPA Hammam

DAY 9 : TRANSFER TO THE AIRPORT

After breakfast and depend on your flight time, we will arrange a private transfer to the airport ( included) , assist you with all formalities and end of the tour.

There are no reviews yet. 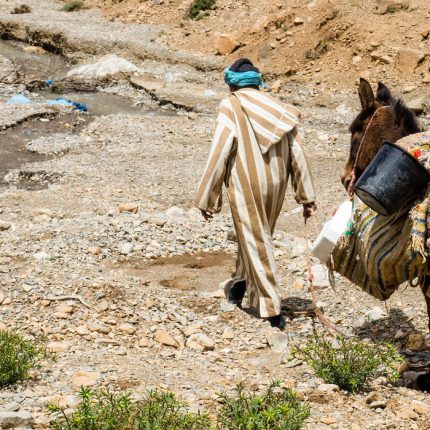 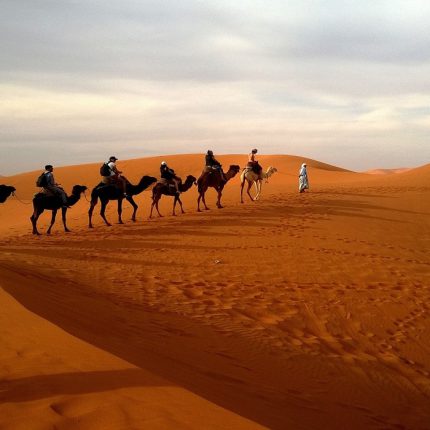 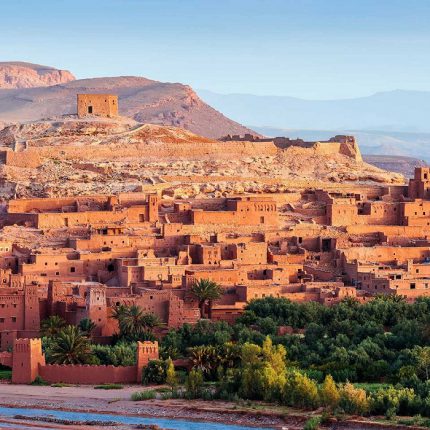 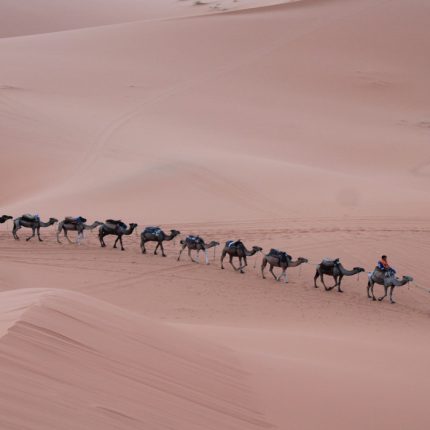